Welcome back to Faro’s biggest garden

Don’t you just love green spaces in the middle of a busy city? A place you can come to escape the hustle and bustle, lie on the green grass and check in with the trees for a bit.

Sitting on a park bench soaking up the sights and the sounds you might expect to see a few happy families strolling by. Maybe even a jogger or two getting in their daily laps. A few pigeons? Sure, why not? What you might not expect to happen, however - is for a peacock to walk past. 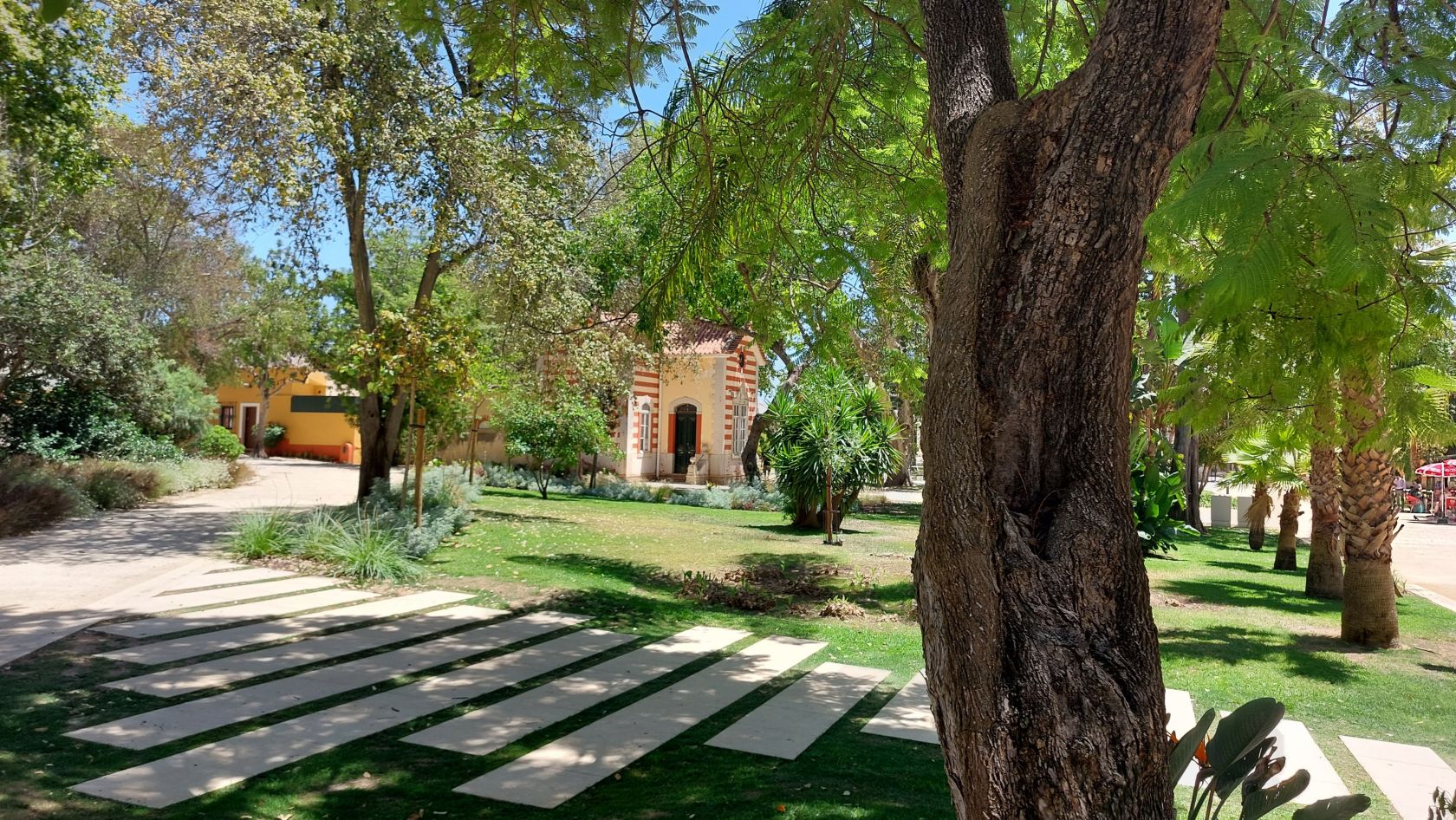 I was quite astonished the first time this happened to me. And, I dare say, this is something that constantly surprises and delights first time visitors to the Jardim da Alameda João de Deus in downtown Faro.

This park was built at the end of the 19th century and it's the largest garden space in Faro. With a huge variety of trees and plants, it's a botanical hotspot and has always been a bit of a wonderland to come and explore. 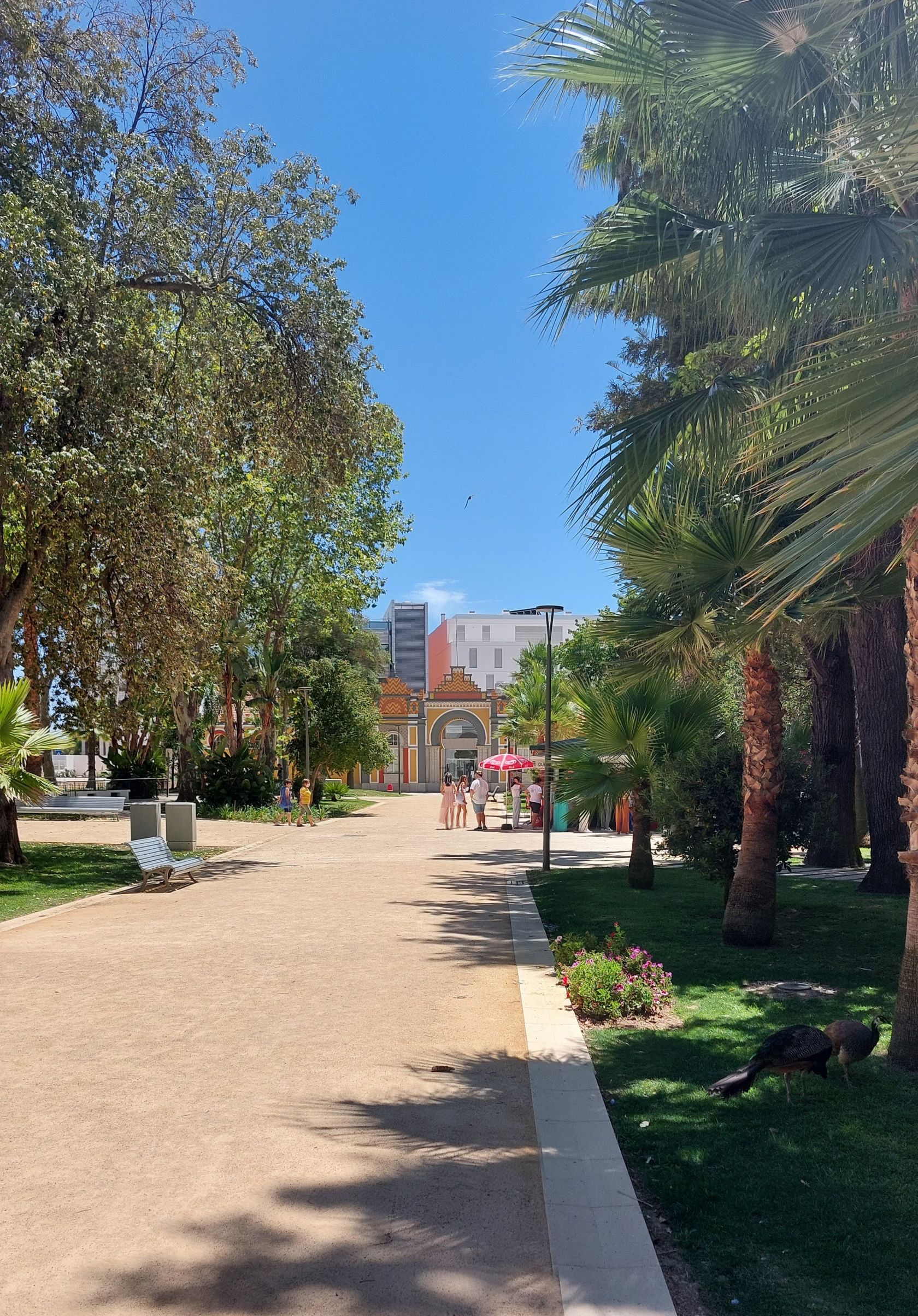 It was starting to look a bit run down and I realised I hadn’t actually visited for 2 years. But that turned out to be just as well - as it's been shut for a revamp.

It was reopened to the public on the 16th of June and I was excited to go back and see what it was like.

Walking over to the children's playground I was intrigued by a long poster covered in cute and colourful pictures that the children at various local preschools had drawn when they had been asked what they might like the park to be like when it reopened?

Now, to be fair, some of the kids are probably a little bit disappointed that they didn't put in a giant Ferris wheel, a trampoline - or even what looked to me like a rocketship station to the moon. 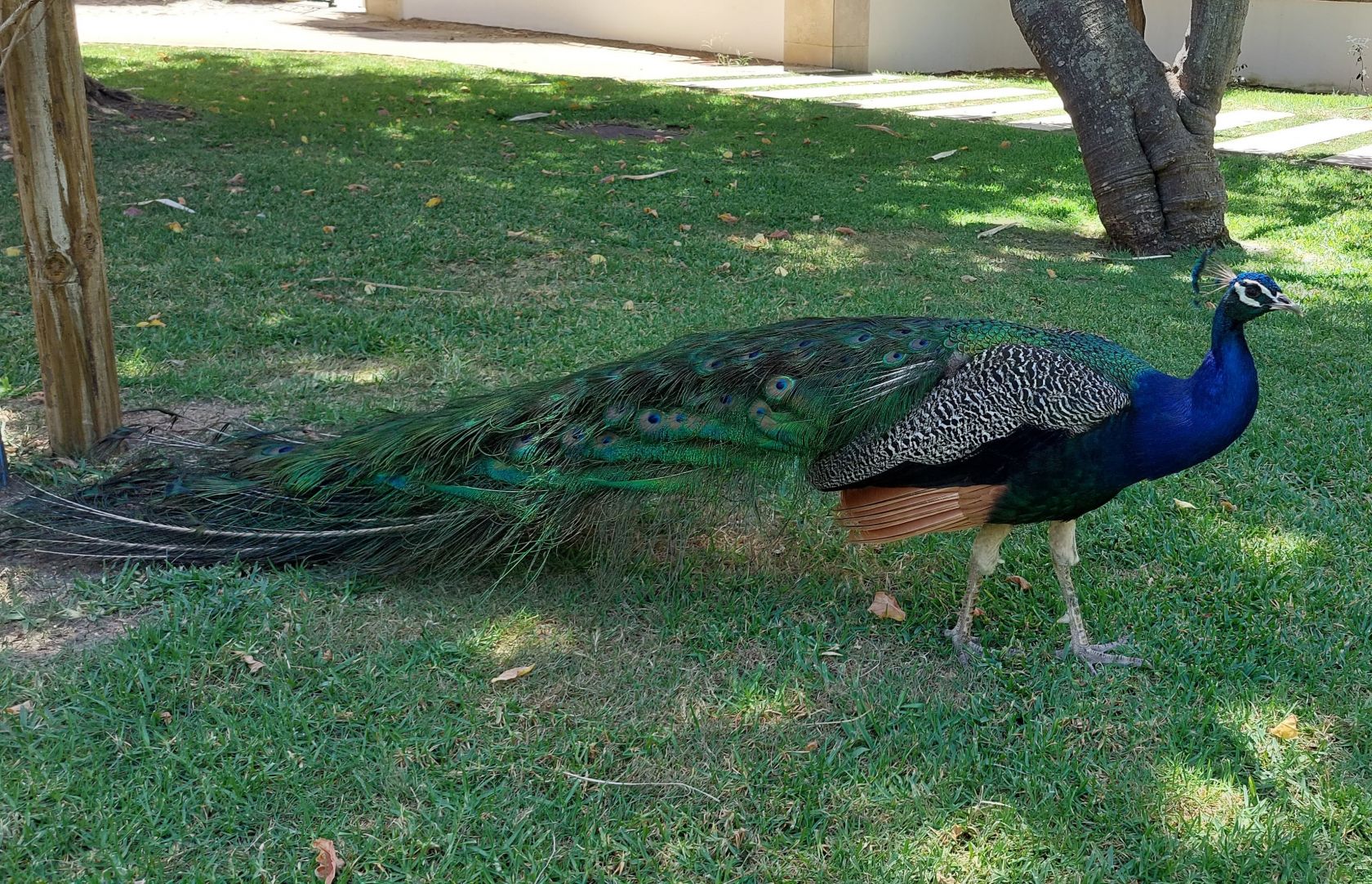 But on the whole, I have to say, the kids seemed to have got exactly what they wished for.

And here they were! Happily swinging, singing and sliding in the playground - surrounded, as so many of them requested in their drawings, by a whole load of green trees (kids have their priorities right).

Picnic in the park again

It's hard to explain exactly what's different here. It's subtle. But things just feel so much better. The grass seems greener. Dead trees have been removed and new ones planted. There are more benches and tables to have a picnic on. The bathrooms and service areas are all spick and span and everything is generally a touch more modern, functional and easier to look after.

But apart from that, I was pleased to see the park has kept its soul and the best things haven't changed. 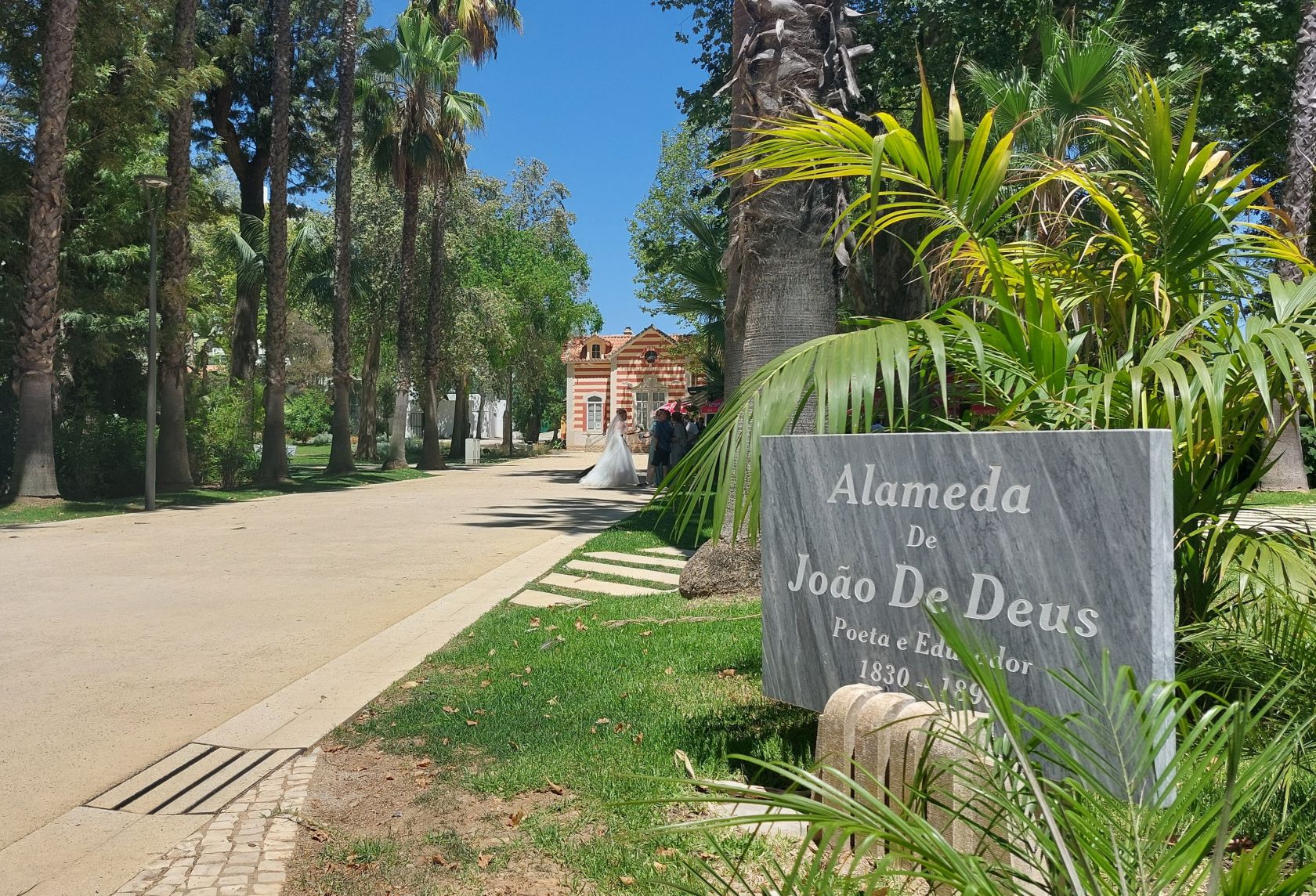 The statue of the crocodile that’s caught a stork by its beak is still there, as well as the one of two frogs frolicking under the fountain where loved-up couples come to sit and hold hands.

Speaking of romance, I even saw a bride in a white dress running around. I don’t think they got married in the park but the place is a photographer's dream for wedding shot options.

Welcome to the jungle

The charming little kiosque café in the centre is still there and so is the dense forest where you can sit on a bench next to some water features and disappear for a while.

Hidden in the trees it's very possible to feel like you are in some kind of exotic jungle. Especially seeing as the park still has all those wonderful peacocks roaming around freely and occasionally stopping to have a good old “Squuuuuark!”.

I don’t think peacocks can fly but I’m at a loss to explain how else they manage to get up as high as they do. I saw one a considerable distance from the ground trying to look into the window of the library.

From the dark days into the light

Oh yes, the library. At the end of the park, there’s the most beautiful entrance to a building that feels like it's straight out of Aladdin.

This magnificent neo-Moorish building was built in 1896 but I’m afraid I have to tell you, for all its beauty - it used to be a slaughterhouse. 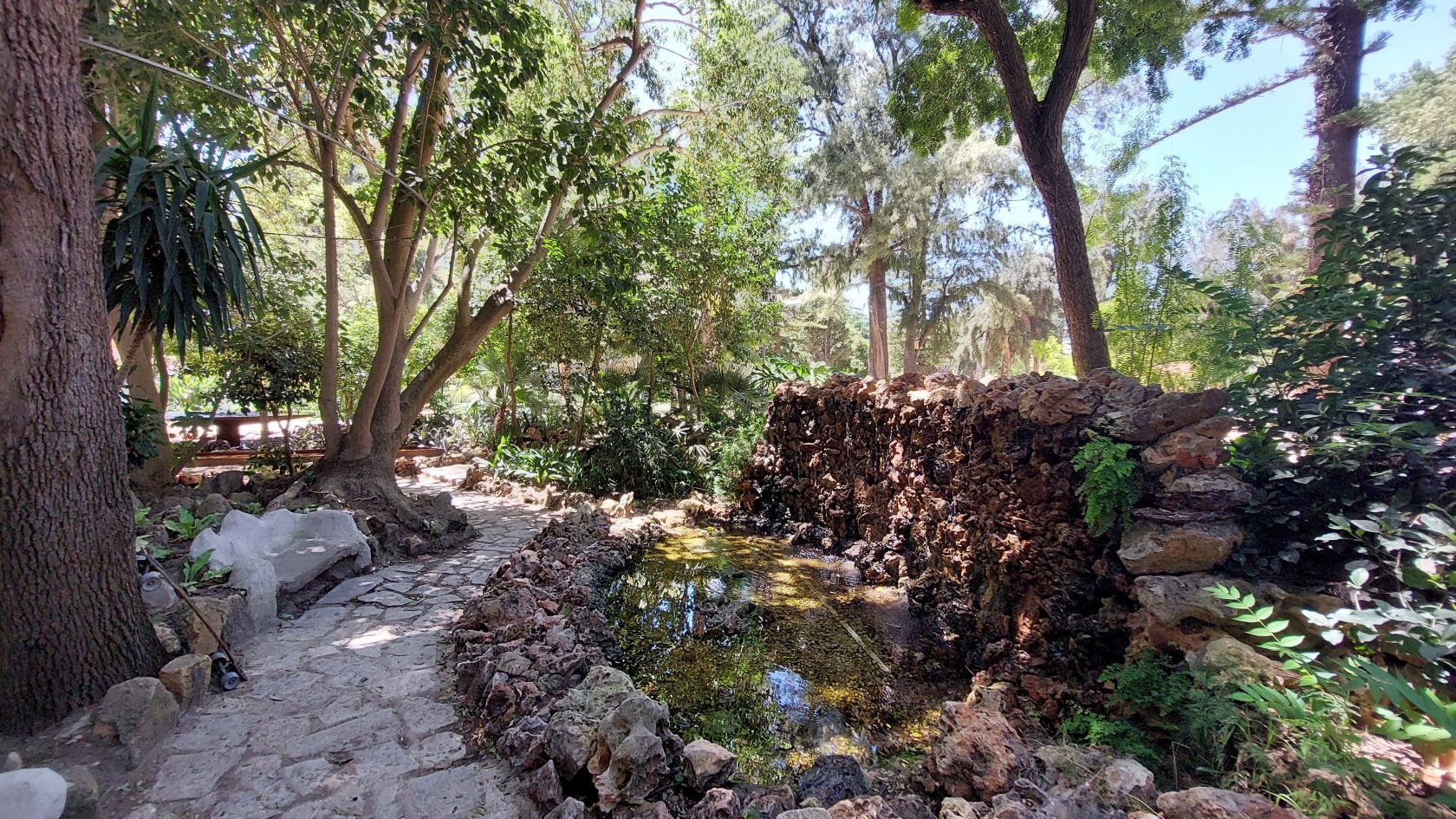 It was closed in the 1970s and after standing empty for many years it is now used for a very different purpose. It was completely renovated and became the new home of the António Ramos Rosa municipal library back in 2001.

In a nice little twist, children can now come here to learn to read using what's called the ‘Cartilha Maternal’ method (using pictures and speaking out loud as a group) which was developed by the poet and educator João de Deus - who the garden was named after.

Take time out for peace of mind

Every bustling metropolis needs its ‘lungs’. A green place for its residents to come and breathe. To sit and commune with nature, to stretch their legs, to exercise - to play. This is Faro’s and I’m very pleased it is back - better than ever. I highly recommend you go eye the peacocks up for yourselves.

This park is magnificent to visit. I would love to see it myself one day soon!

Thank you for drawing our attention to this oasis of calm and coolness in Faro! We got off the train specially at Bom João and walked the short distance along to the Continente store on the corner and then turned inland, and there it was. Plenty of peacocks so we were not disappointed on that score, and the ponds and water-features were a real pleasure in the heat of the day (though some of the frogs around the pond seemed to have lost their eyes, and some ducks or other wildlife would also look very much at home in the pond).

Putting Faro on the podium of top destinations

Flying south - it's not just for the birds!

Who are the clients buying in Faro?

6.4% of properties bought by foreigners

To breathe calm and green