If there was ever a danger of anyone getting weary of Algarvian delights, an entirely different vibe awaits - in Seville.

At just 150 kilometers from the Portuguese border, it might be a case of why not check it out? Getting to Seville couldn't be easier, it takes about an hour and a half (by car) from the eastern side of the Algarve. The road to Sevilla is an excellent dual carriageway every step of the way. So, the urban delights of this historic Andulician beauty are quite doable from the Algarve.

Seville is the largest city in Southern Spain. It's a city famed for many things, not least of all the flamboyant, strangely aggressive (yet elegant) flamenco dancing. The city is also known for its incredible abundance of magnificent architecture. Seville is a city brimmed full of the most extraordinary history and culture, all of which add up to make it one of Spain's more intriguing attractions.

These days bullfighting has become a controversial activity. However, ‘the Bullring’ (Plaza de Toros) is one of Seville’s most popular sights. The arena is thought to be one of the finest of its kind in the whole of Spain. It can host over 14,000 spectators with regular fights being held there to this day. If bullfighting is not your cup of tea, you can still visit the venue during quieter times. It's a worthwhile exercise because the arena alone is such a fabulous sight to behold.

I personally believe that quirky culture is a warts and all sort of affair. Let's face it, whether we personally endorse bullfighting or not, there’s little that embodies the spirit of Spanish culture more than matadors and the bulls. It's just so quintessentially Spanish. Walls and alcoves in some of Seville’s tapas bars are adorned with the heads of some of the bulls that were slain in the arena, alongside examples of the flamboyant costumes worn by some of Spain's most legendary matadors.

Seville is truly a fabulous city of over 1.5 million souls. It's an absolute maelstrom of vibrant activity which resonates on its many interweaving streets, lively plazas and shady sun-dappled parks. The city is always emblazoned with fabulous floral displays with some of the plazas thickly filled with the scent of jasmine. This is a truly wonderful city and a fantastic place to be.

This region of Spain can get rather hot at times, so a shady late afternoon stroll along the banks of the Guadalquivir river might be just the ticket. Visiting the huge and sublimely ornate Plaza de España with the nearby shady ornamental gardens of The Parque de María Luisa is an absolute must. I can't help going off for my mandatory stroll around this magical place each time I visit Seville. It just puts me into that "I really am in Seville vibe."

Talking of soaking things up. I naturally enjoy soaking up some of the region's wines and beers as well. After all, it's all part of that all-important process of "enjoying the authentic flavours of Seville."

A tapas tour of the old town in areas such as Alameda, Macarena, Nervión, Los Remedios or Triana will be crammed full of that crucial authenticity factor. But it's wise not to necessarily expect all the menus to showcase their tasty treats in any language other than Spanish. This means that a tapas tour can quite swiftly turn into a bit of an epicurean lottery, unless, that is, you're willing to use my own personal tactic of stealthily observing what some of Seville’s more seasoned tapas eaters are ordering. I then replicate the orders that look to be the most appealing. It works for me! Patatas bravas are always a safe bet but I don't think I've ever visited any two tapas establishments that share quite the same sauce recipe. Be careful though, because patatas bravas are quite filling, so chowing down on those outrageously flavoursome carbs might just spoil your appetite and scupper your evening's gastronomic ambitions.

One of my favourite areas of Seville is Plaza Alameda de Hércules. It's often frequented by students who flock to the bars and eateries each evening. The area comes alive after dark but it nevertheless retains a convivial and chilled-out atmosphere. Here, tapas bars often serve some more contemporary fare such as ceviche or sushi. Of course, there are music venues offering live jazz as well as the odd burst of traditional flamenco. Gay bars and clubs party on well into the balmy Andalusian nights which often feel decidedly tropical. Unsurprising perhaps, because hereabouts temperatures didn't dip much below 25C on the evenings we spent there.

If time is not an issue, there's always the option of visiting nearby Jerez to sample some delicious sherry alongside some more traditional Spanish fayre? You can either drive or there are daily coach excursions running to Jerez and Cadiz from Seville. 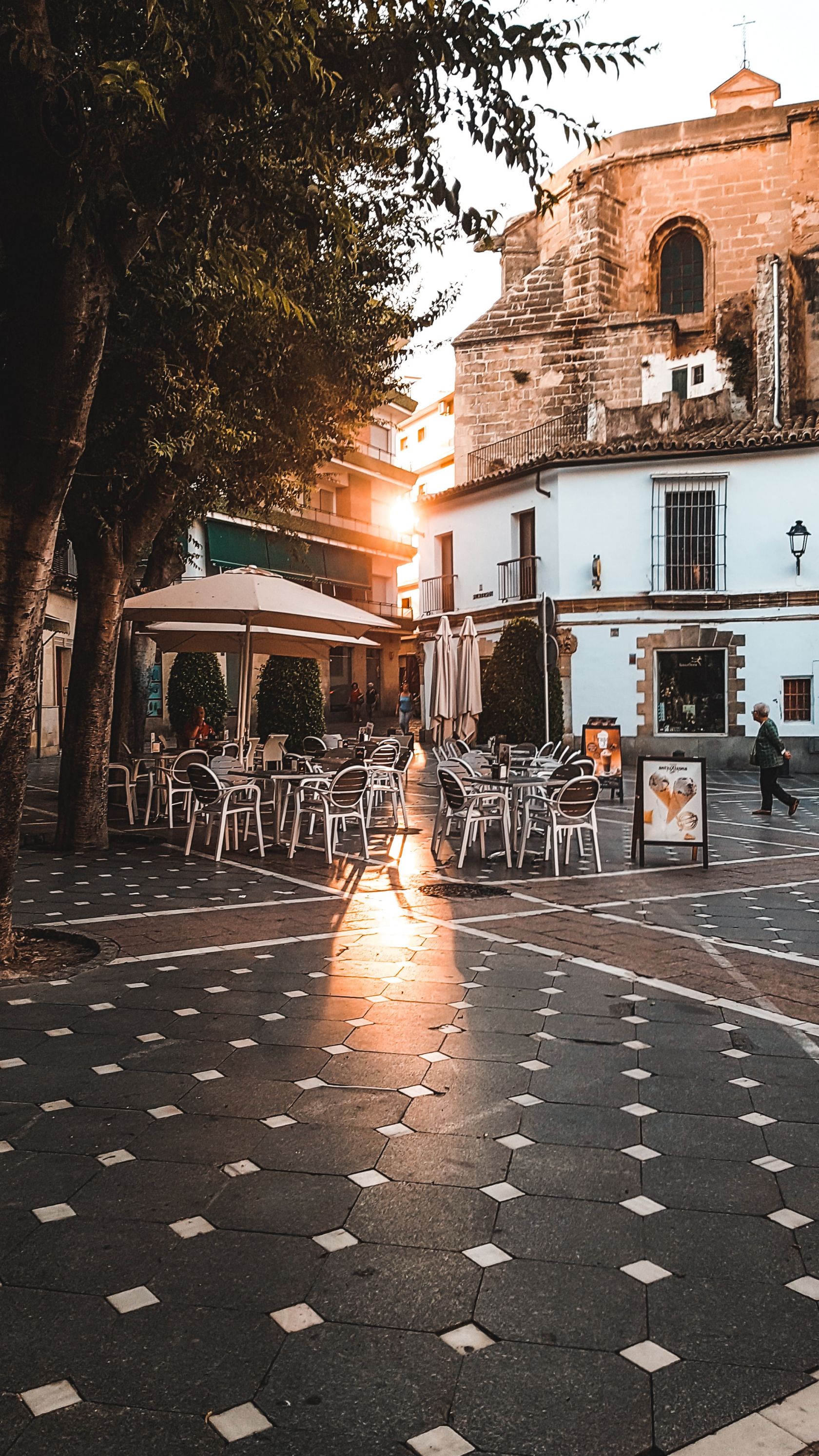 Jerez de la Frontera (more commonly known simply as Jerez) is a lovely city in the province of Cadiz. The old town surrounds the Alcázar de Jerez which is a Moorish fortress. The Royal Andalusian School of Equestrian Art is Jerez's famous riding school which hosts numerous horse shows as well as boasting a carriage museum. The city of Jerez is also renowned for flamenco music, dance and sherry production. The sherry is actually produced in the so-called "Sherry Triangle" which lies to the west of the city itself.

I was fortunate enough to call into Jerez during the 2nd week of May whereby I accidentally stumbled in on the annual Jerez horse festival. This is a highly vibrant, colourful and lively event that brings the entire city to the González Hontoria fairground. This is a large area just on the fringes of the city where there's ample open space to showcase Jerez's finest horseflesh. During the festival, many of the locals dress for the occasion with both the men and the women donning their finest traditional Spanish attire. I got the feeling that this was a celebration of local culture as much as it was a demonstration of all things equestrian.

You may discover, as I have done, that a jaunt to seductive Sevilla is well worth the candle. It's just too tantalisingly close to the Algarve to ignore. There's so much to see and do when you're out and about sampling Sevilla. If you haven't done so yet, then it comes highly recommended.

I'm for the bull

Combatting the cost of living crisis

Showcasing a different side to Portugal