Can the EQS deliver the high-end experience people expect from a six-figure luxury car? Jack Evans finds out.

Mercedes isn’t wasting any time in expanding its EQ range of electric vehicles – and the EQS sits at the very top as the firm’s battery-powered flagship.

Designed to offer the sumptuous quality and peerless refinement you’d get from the regular S-Class, the EQS arrives with an impressive claimed range of up to 453 miles and performance that would give a hot hatch a run for its money. But can all of this combine into a car that would tempt buyers away from petrol and diesel alternatives?

Mercedes has started strong from the get-go, creating a bespoke platform for the EQS that will go on to underpin the firm’s future luxury and executive EVs. In doing so, it’s freed up interior space that wouldn’t be available had it adapted the EQS from an existing petrol or diesel chassis.

But as befitting a flagship, the EQS is also kitted out with a range of next-generation systems. You can get it with the latest ultra-wide ‘Hyperscreen’ for instance, while rapid charging means drivers shouldn’t have to wait around too long for a top-up.

WHAT’S UNDER THE BONNET?

The EQS is available with a punchy all-wheel-drive setup in the range-topping Mercedes-AMG EQS 53. The car we’re testing is the more efficiency-focused 450+. It’s got a single rear-mounted motor with 325bhp and 568Nm of torque, which translates to a still-respectable 0-60mph time of just six seconds, while flat out it’ll manage up to 130mph.

But the real draw is the range of the EQS. Mercedes claims you could see up to 453 miles from a single charge, which gives it one of the longest ranges of any EV on sale today. Capable of charging at up to 200kW, the EQS could top up its 107.8kWh battery from 10-80% in 31 minutes when hooked up to a rapid charger. This equates to 186 miles of range for every 15 minutes spent on charge. 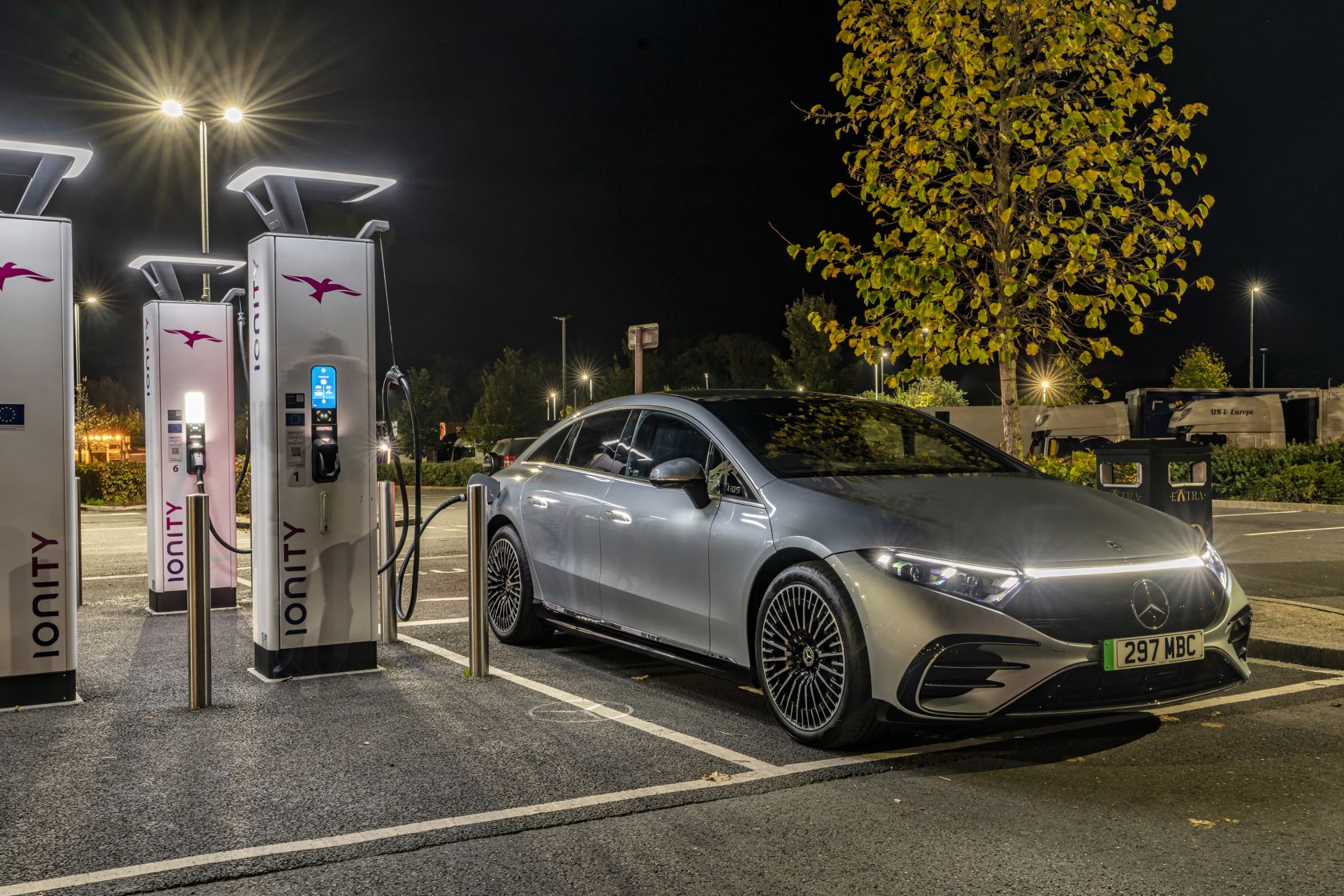 The EQS manages to take some of the superb refinement that you get in the regular S-Class and only elevate the experience. Because there’s a lack of any engine noise, the cabin of the EQS is as hushed as you like, with both road and wind noise kept well isolated from interrupting the peace. It’s quick too, but this isn’t a car you try to hustle along. It’s one that you’d rather just settle into a cruise in, which it undertakes with impressive ease.

The rear-wheel steering fitted to the EQS is also a real marvel. At slow speeds, the system allows the rear wheels to oppose each other, effectively shortening the car’s wheelbase. In reality, it means you can perform three-point turns in even the narrowest of areas with ease, which is something you wouldn’t expect a car measuring just over five metres long to be capable of.

HOW DOES IT LOOK?

In truth, we’re not sure about the looks of the EQS. It just feels as though it lacks any real styling touches and has instead been designed solely in the wind tunnel. Of course, aerodynamic efficiency is of great importance in an electric vehicle, but it’d be nice to see some interesting elements added to the EQS to spruce things up a bit.

That said, you do get a full-width light bar at the front – something we’ve come to expect from nearly all new EVs – which gives the EQS a futuristic look at night. It’s just not the most exciting-looking of cars. 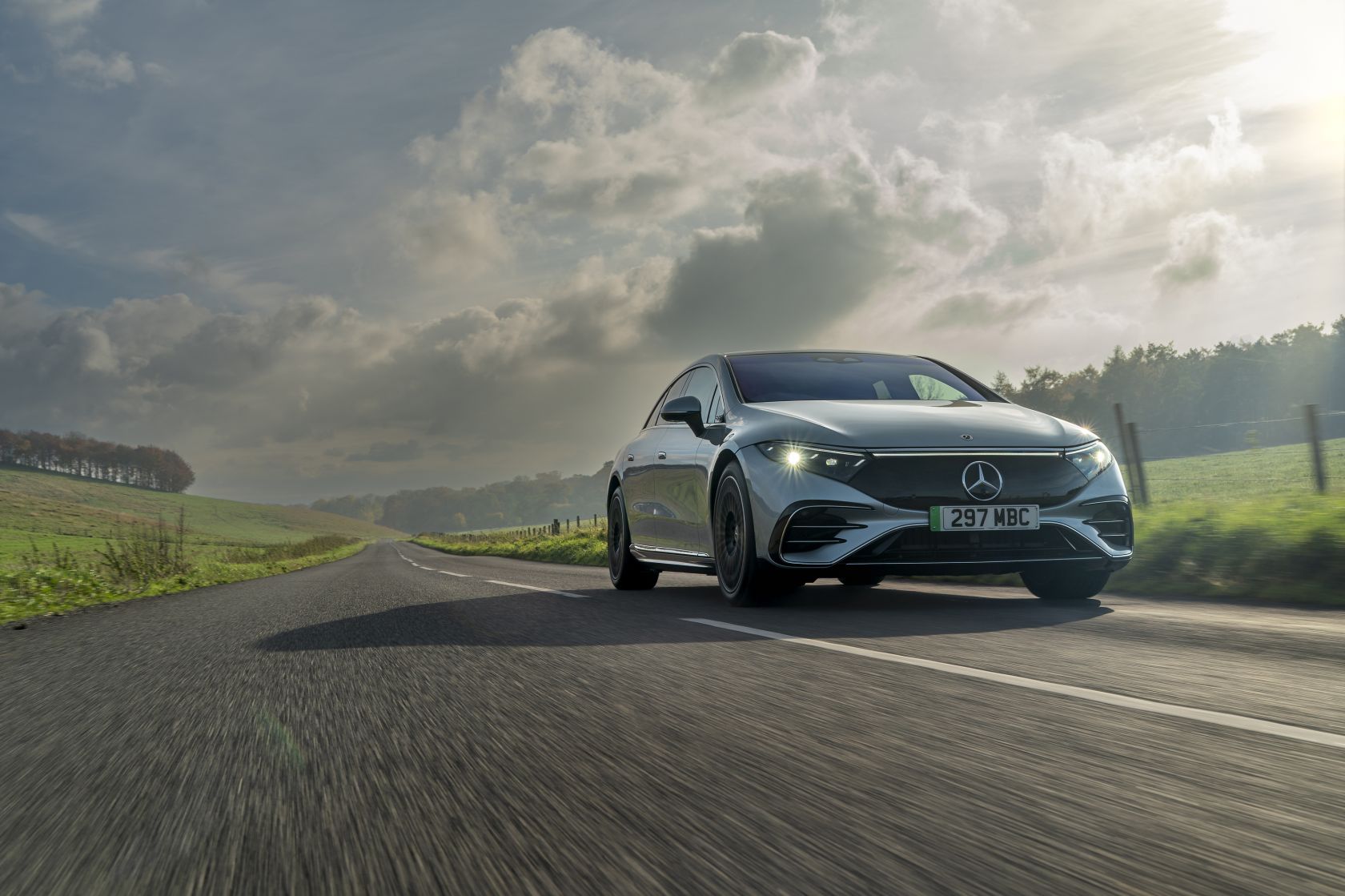 The refined driving character of the EQS is mirrored within the cabin. It’s a wonderfully comfortable place to be, with well-bolstered front seats ensuring long-distance journeys won’t be accompanied by backache. We still have our reservations about the steering wheel controls as, like they do in other current Mercedes models, they can feel a little clumsy to operate and not as tactile as we’d like.

Those sitting in the back are going to get one of the best experiences in the business. The flat floor means there’s loads of legroom – even for the person sitting in the middle – while there’s plenty of headroom too. When it comes to boot space, the EQS offers 610 litres with the seats up or 1,770 litres with them folding down. There’s quite a large load lip to contend with, mind you.

Much like the S-Class, the EQS comes with some of the very latest technology that Mercedes has to offer. Our test car didn’t come with the aforementioned ‘Hyperscreen’ – it’s available as an optional extra on AMG Line Premium models and above – but it still had a large 12.8-inch central display alongside a 12.3-inch driver display. Both are brilliantly clear and easy to read, with the main infotainment touch controls being responsive and quick.

Our Luxury Line car had all of these features you’d expect from a car with this kind of price tag. Highlights included ship-deck-style wood on the dashboard, 22-inch alloy wheels and even a fingerprint scanner so that drivers can instantly load their pre-selected settings at the press of a finger.

The EQS doesn’t just do well as an electric car, it does well as a luxury car in general. With its ultra-long range, there’s very little penalty for choosing it over a petrol or diesel option, while that silent powertrain only helps to elevate even further the hushed cabin experience that you get from a car of this type.

Although its looks might not have us sold, in all other areas the EQS is a truly impressive proposition.

FACTS AT A GLANCE

Philkotse - the best car classifieds site in the Philippines

Police clamp down on drink driving