Hannah Stephenson finds a haven of health-enhancing flora and fauna on this lush and volcanic Caribbean island.

Dragon’s blood, hanging crab claws and giant fishtails surround me, heightening my senses – although I’m in an environment far more calming than these strange horticultural names might suggest.

Working my way through acres of palms, I brush past scarlet ginger lilies, fragrant frangipani and a tree offering trailing black berries, which my guide Coady describes as Bob Marley’s dreadlocks.

This is where dragon’s blood, a striking deep red sedum, provides creeping ground cover. Spiky red flowers with yellow tips give the illusion of suspended crab or lobster claws, and huge palms mimicking giant fishtails form part of the exotic planting within this tropical landscape, part of the 2,000-acre Soufrière Estate.

Coady points out wafts of lemon grass, which make a great alternative to regular mosquito repellent if you rub the leaves on your skin, as well as St John’s Bush, which is said to ease menstrual cramps, and the aptly named tree of life, which apparently aids the immune system and helps reduce cholesterol.

Further on, we reach the Diamond Waterfall, not the most imposing at 50ft high, but whose therapeutic mineral-laden cascades have tinted the rocks a blend of yellow, green and purple. It is served by sulphur springs upstream, its mineral-rich volcanic waters spilling over the rockface.

While you can’t swim at the foot of the falls, hot spring baths nearby should satiate anyone’s desire to take a dip. It is said that bathing here aids rheumatism, respiratory complaints and ulcers.

Volcanic soil is the key to the lushness of this Caribbean island, situated between Martinique and St Vincent and to the northwest of Barbados, its richness and tropical rains encouraging even the most difficult of plants to thrive.

Around 300,000 years ago, volcanic activity created a legacy of beauty in the famous Pitons – Gros Piton and Petit Piton – majestic mini mountainous lava globes rising from the Caribbean Sea, and now covered with vegetation and trees. They’ve become prime hiking trails accessible to tourists wanting to get a better view.

Nestled between those Pitons like a perfectly fitted Cinderella’s slipper is the luxurious Sugar Beach resort, itself a botanical paradise spread across more than 100 acres of tropical forest with enough planting to mimic Diamond Botanical Gardens’ flora and fauna. 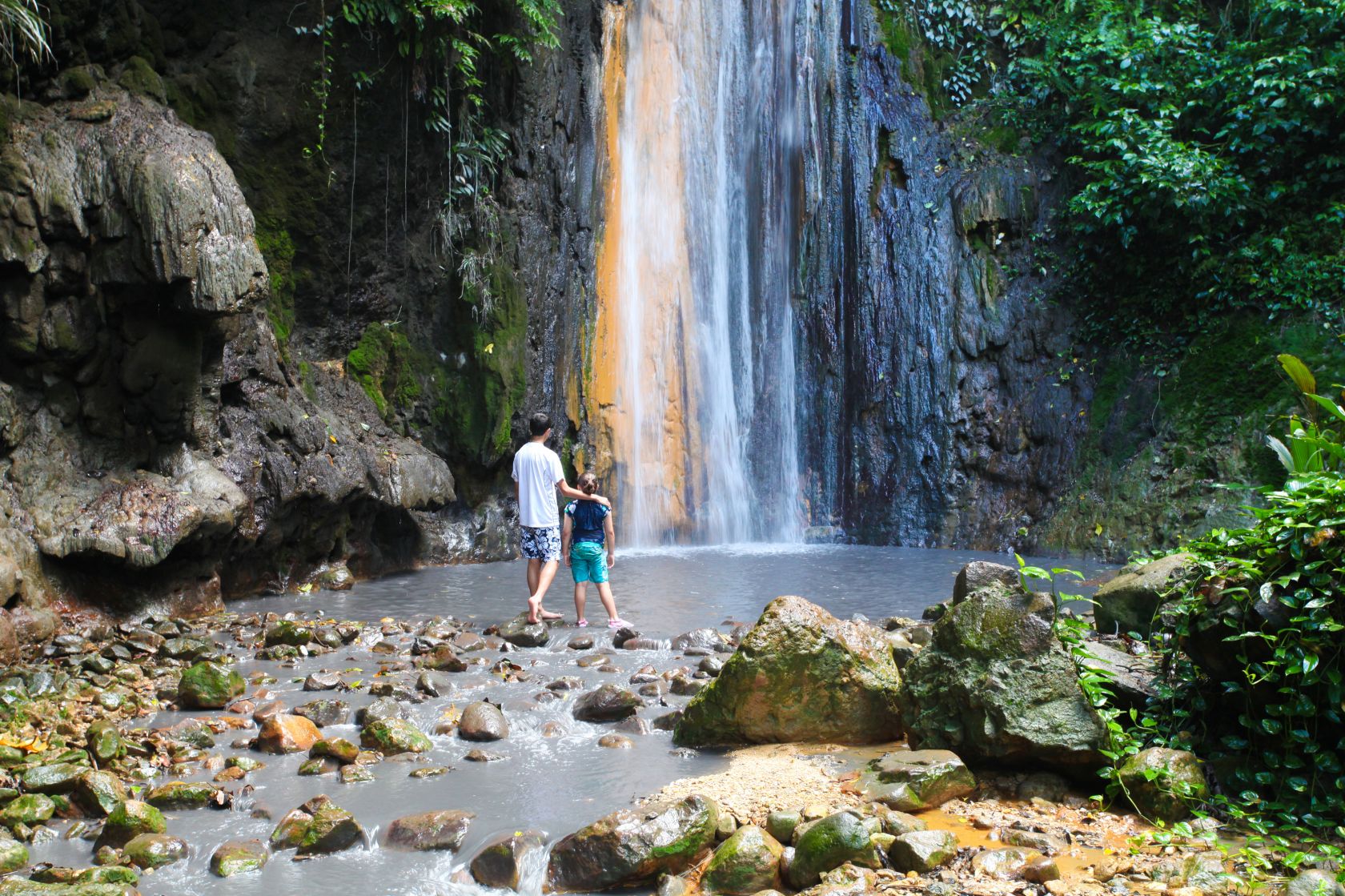 Formerly a working sugar plantation, the property has a long history of owners including Lord Glenconner, famously known for his friendship with Princess Margaret, and is now owned by the Green family, owners of The Connaught and Claridge’s in London, and managed by Viceroy.

It’s super-luxe with white-on-white interiors, a plunge-pool in each accommodation and butler service. But its stand-out beauty lies in the majestic scenery which envelops it. From one end of the large swimming pool near the beach, it feels like you could touch Petit Piton’s almost vertical charcoal-coloured rockface.

Following a steep meandering road down from the barriered entrance, there’s no indication that Sugar Beach houses 105 resort accommodations and 25 residences, because they are all so subtly positioned, from the beachfront bungalows which overlook the shimmering white sand imported from Guyana, to luxurious, vast villas secreted among the plantings of palms, flamboyant trees and other tropical gems.

An enviable collection of modern art ranging from the likes of Andy Warhol to Damian Hirst provides a contemporary twist, adorning walls throughout, even in the well-equipped children’s club.

Sugar Beach was the first resort on the island to re-open after the pandemic, and wisely kept the gardeners on throughout lockdown, explains head gardener Julian Joseph.

“The gardens have evolved over the years, as landscapers had different ideas. We’ve tried to avoid the use of imported materials and plants which are going to become invasive,” Julian explains.

You can dine on oysters and Tomahawk steak in the grand colonial splendour of The Great Room or go to the beach for more informal pizza, pasta and tacos at the Bayside Restaurant.

Edibles including bananas, mangoes, coconuts and avocados are pointed out in the regular garden tours, which are conducted by the horticulturalists on site.

Much of the produce goes into the salads, salsas, sauces and other delicacies on the menus, or is incorporated into the plethora of cocktails served in the stylish resort bars.

Wellbeing is big here – from yoga to Piton hikes, rainforest spa treatments featuring natural products, and gentle walking trails where you may spot hummingbirds, will certainly encounter lizards, and according to one young guest, may come across the odd scorpion.

Deep within the network of tropical planting is a rainforest spa, a lantern-lit long wooden corridor leading to treehouses on stilts, perched high above the ground and fringed by a stream. Here, singles or couples can have a range of treatments, many with a nod to the landscape – bamboo massages, body scrubs made from cinnamon, and coconut and sulphur mud wraps to detox and relax.

But if a hotel beauty treatment feels a little sterile, there are natural remedies a short drive away, which will provide a grittier, smellier experience altogether. 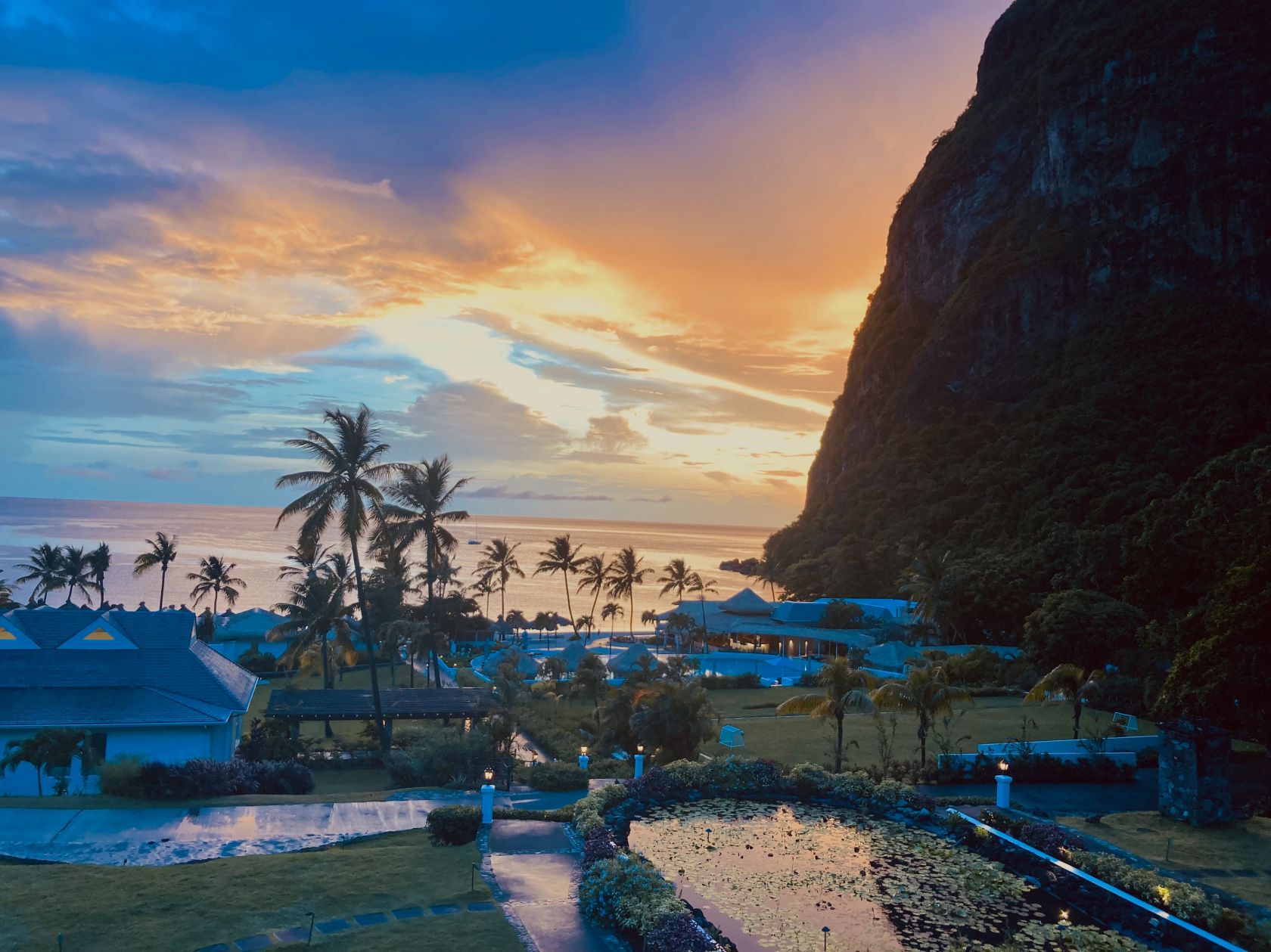 Venturing out, I dunk myself in toe-curlingly hot muddy water at Sulphur Springs – Soufrière (the former capital) gets its name from the French meaning sulphur mine – slathering myself in gritty, sand-coloured volcanic mud, known for its exfoliating and skin-enhancing properties. The site is a short walk from the edge of the crater known as La Caldera (the cauldron), described as the Caribbean’s only ‘walk-in’ volcano.

While waiting for the mud to dry on my skin, an artistic aide war-paints me with a necklace of charcoal-coloured mud for fun, before I wash the whole lot off in another slightly less scalding pool. The healing mud is said to relieve sunburn and ease sore joints and arthritis. My skin feels smooth, soft and refreshed.

But it is the sight of the crater nearby, a rocky landscape dotted with mud pits of scalding bubbling water throwing up clouds of smoke and steam, which really sets my skin tingling.

Here, the pungent, rotten-egg stench of sulphur billowing from the cracks in the earth catches your throat, and the stark landscape is far removed from the lush oasis its volcanic nutrients have served in the nearby botanical garden. At least the smell keeps the snakes and spiders away, our guide John says, grinning.

While the volcano hasn’t erupted in thousands of years, it is still active and the crater around which we stand is now cordoned off. Yet John recalls that as a child, he and his friends would picnic and play on the hot sulphur-infused terrain, dodging those deadly bubbling pools as they went.

All that changed 33 years ago, he recalls, when a tour guide jumped rather too hard on the surface and the earth gave way, resulting in him suffering second-degree burns. That’s why we are now only allowed to observe the scene from a distance.

In the heat of the day, the lush forested oasis of Sugar Beach is beckoning, as we wend our way down to the beach, past deep red crotons, phoenix and areca palms, coral hibiscus and sizzling scarlet flamboyant trees. Hanging crab claws and dragon’s blood never felt so inviting.

Shannon Airport bounces back after Covid with passenger numbers tripling

Why Austin could be America’s wackiest city break

I ignored the clichés and gave Benidorm a pop