This week I would like to share a few ‘bits’ from one of my favourite travel books. It's by a chap called Ted Simon (otherwise known as Jupiter) who, back in the 1970s, was the first person to drive around the world by motorbike.

In the days without our smartphones to tell us which way is ‘around’ (and a million other things) this was a true adventure. And, luckily for us, Ted Simon is a writer and chronicled his journey in his book ‘Jupiter's Travels’.

This means that by flicking through its pages we can now travel back to a different time (and world), get on the back of his Triumph and ride along this incredible journey with him - with the added benefit of not having to swallow quite so many bugs and, hopefully, not having to spend any time in prison.

And, if we make it - we can do it all again! Like Ted Simon did in 2002, this time at 69 years old. In ‘Dreaming of Jupiter’ his wheels spin once more as he retraces his steps, or tire tracks more accurately, and it's fascinating to see how the world has changed since his first ride.

But for this story I want to concentrate on Jupiter's first orbit and give you a little taste of the dusty deserts, starry night skies and, just in case you start to romanticise about it too much, I'll end with what sounds like a quite serious wipeout…

It's the journey, not the destination

To be worth making at all, a journey has to be made in the mind as much as in the world of objects and dimensions. [...] I am learning, as I make my way through my first continent, that it is remarkably easy to do things, and much more frightening to contemplate them. [...] What happened on the way, who I met, all that was incidental. I had not quite realised that the interruptions were the journey. 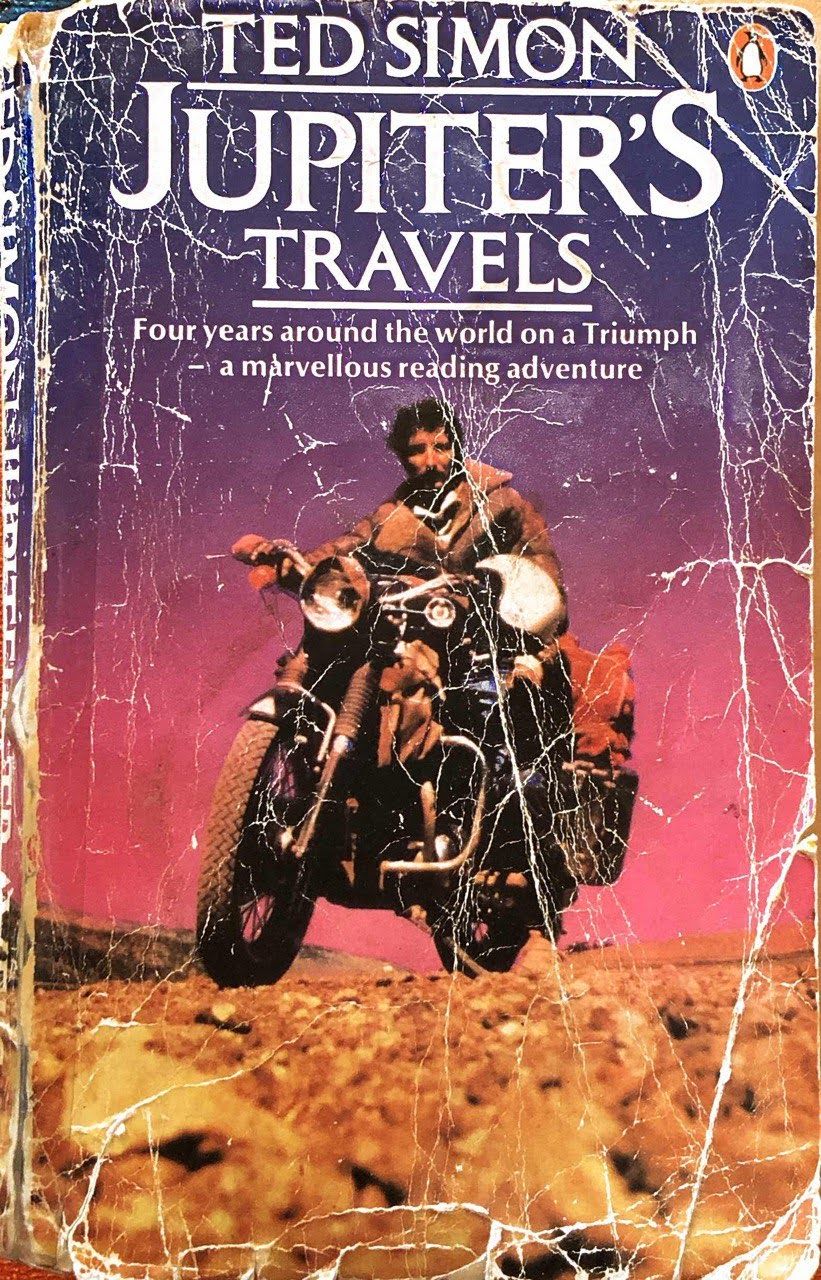 Come from space to teach you of the Pleiades

For three days and two nights I drift up the Nile along Lake Nasser. The sunrises and sunsets are so extraordinarily beautiful that my body turns inside out and empties my heart into the sky. The stars are close enough to grasp. Lying on the roof of the ferry at night, I begin at last to know the constellations, and start a personal relationship with that particular little cluster of jewels called the Pleiades, which nestles in the sky not far from Orion's belt and sword. Really, those stars, when they come that close, you have to take them seriously.

There are other goodbyes too delicate and too fraught with emotion to be written about in passing, for I have lived a while. On my way down through Europe I learn the value of the love I am abandoning. At times I experience a degree of misery and hopelessness I have not known since adolescence. I wonder if I will have the capacity ever to bear such pain again. It occurs to me that may be the condition for perpetual youth.

In spite of wars and tourism and pictures by satellite, the world is just the same size it ever was. It is awesome to think how much of it I will never see. It is not a trick to go round these days, you can pay a lot of money and fly round it nonstop in less than forty-eight hours, but to know it, to smell it and feel it between your toes you have to crawl. There is no other way. Not flying, not floating. You have to stay on the ground and swallow the bugs as you go. Then the world is immense. The best you can do is to trace your long, infinitesimally thin line through the dust and extrapolate.

So I steered a middle course and, gaining confidence, increased speed until I was doing nearly forty miles an hour in third gear. Then, quite unexpectedly, two sets of wheel tracks converged and intersected in front of me. I could not avoid them, nor could I stop. I bounced through the first track but nose-dived on the second. I saw it coming, and was interested to notice that I did not say 'Christ' or 'F***ing hell' or 'Here we go, my darling' or even 'Sic transit gloria.' I said: 'Oops!'

Where is the UFO Evidence? 14 Notable Cases